A couple of hours before the start, it was confirmed that Fernando Alonso would start at the back of the grid for his home Grand Prix as a fourth power unit of 2022 was fitted to the Alpine car.

All drivers apart picked the soft compound tyre for the start, with the exception of Lewis Hamilton who chose the medium.

Off the line, Carlos Sainz got a poor start and lost positions to Russell and Perez. Hamilton also looked set to pass but the Spaniard kept him around the outside at turn 3.

Into turn 4, Hamilton and Magnussen touched as the Dane tried to go around outside after the Mercedes had lost out to Sainz, leaving both with damage and forced to pit at the end of the opening tour.

The Dane runs off into the gravel at Turn 4. The Mercedes driver has damage and limps back to the pits for repairs #SpanishGP #F1 pic.twitter.com/7mV0YAbGxF

Mick Schumacher gained four places on the first lap to move into P6, as Esteban Ocon climbed from 12th to 9th. It was also an excellent start for Alonso has he moved up to P15.

Alfa’s Valtteri Bottas soon got back in front of Schumacher, as Ocon also cleared the German.

Alonso continued his charge as he overtook the Astons and Gasly.

Another unforced error came from Carlos Sainz on lap 7 as he spun in turn 4. He managed to get out of the gravel but dropped to 11th from 5th.

Sainz goes off at Turn 4, recovers but returns to the track in P11 #SpanishGP #F1 pic.twitter.com/nA0pZvgIV7

Two laps later, Verstappen repeated what Sainz did as he had a snap and lost the rear in the same corner, losing positions to Russell and Perez.

Now Verstappen is in the gravel at Turn 4! 😮

Red Bull quickly swapped the cars around following a couple of failed attempts by the Mexican to pass Russell.

After a frustrating Q2 exit, Lando Norris started making progress and moved into the top 10 as he overtook Ricciardo and Tsunoda.

Most of the midfield runners pitted early for mediums – as did the Ferrari of Sainz. Bottas in P5 led Vettel, Ocon, Sainz, Norris, Tsunoda, with home hero Alonso in P11.

Sainz continued his recovery as he passed Vettel and Ocon to move into P6.

Russell and Verstappen both pitted on lap 14 as they switched to mediums. The Dutchman had intermittent use of DRS as his qualifying woes continued in the race.

After laps and laps of hassling, Verstappen and Russell went wheel-to-wheel on lap 24. The Red Bull dived down the inside at turn 1, but the Brit brilliant came back in turn 2 and held on to P2.

Perez and Leclerc boxed on laps 18 and 22 respectively. The Mexican rejoined in 3rd, with Leclerc resuming in a very comfortable lead.

While running with a lead of over 10 seconds and easing away from Russell and the two Red Bulls, Charles Leclerc lost power and retired from a race he seemed certain to win.

The Ferrari driver has lost power and is out of the race #SpanishGP #F1 pic.twitter.com/iA2VPKueqT

As Russell took the lead, Verstappen pitted at the end of lap 28 as he was stuck in P2. He came back out in P4 but quickly cleared Bottas for 3rd on lap 31.

Verstappen’s stop allowed Perez to attack Russell and the Mexican used DRS to pass on the 31st lap of the race to take the lead.

In the midfield scrap, Gasly spun Stroll around, earning himself a 5-second penalty and two penalty points because of it.

Just as Verstappen caught Russell – gaining two to three seconds a lap after his second stop – Mercedes pitted the Brit for mediums on lap 37.

After the second stops for most drivers, the top 10 was Verstappen, Perez, Russell, Bottas, Sainz, Hamilton, Ocon, Vettel, Norris and Alonso.

Vettel finally pitted for a second time on lap 44 and returned to the track in P14. He would ultimately finish 11th as the two-stop didn't quite work out.

Race leader Max Verstappen pitted a lap later and managed to rejoin between Perez and Russell as he showed impressive pace on older tyres against the Mercedes.

The order was Perez, Verstappen, Russell, Bottas, Hamilton, Sainz, Ocon, Norris, Alonso and Tsunoda with twenty laps to go as Sainz boxed for a third time.

The inevitable change of the lead came on lap 49 as Red Bull asked Perez not to fight Verstappen and let him go at turn 4.

Behind the Red Bulls, Russell, Bottas, Sainz, Ocon, Hamilton, Norris, Alonso and Tsunoda was the order with sixteen laps to go.

A flurry of stops from Perez, Russell, Ocon, Norris, Alonso and Tsunoda didn’t change much as the Spaniard and Japanese drivers eased past Schumacher on much fresher boots.

Carlos Sainz and Lewis Hamilton rapidly caught Valtteri Bottas on their fresher tyres and breezed past the Finn for 5th in 6th at turns 1 and 3 on lap 58 respectively.

Hamilton continued his remarkable charge a couple of laps later as he passed Sainz for P4 after running P19 at the start of the race.

Unfortunately for Hamilton, he was ordered to lift and coast in the closing laps as a power unit leak. He lost position to Sainz but managed to take P5.

Out front, Verstappen eased to victory from Perez, taking the World Championship lead by six points from the unlucky Leclerc in the process.The Mexican driver set the fastest lap of the race to give Red Bull a maximum haul of 44 points.

George Russell completed the podium as he secured a second P3 in 2022.

Sainz was 4th on a tough day for Ferrari as Hamilton’s magnificent recovery drive saw him end up P5 despite his late gremlins. 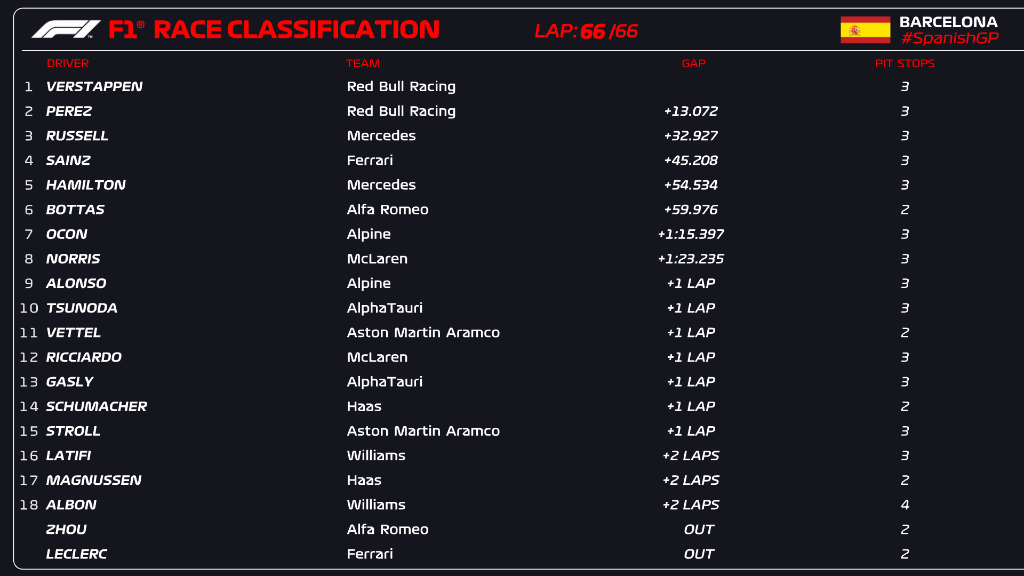 F1 | British GP | Bottas on Zhou, safety and car's reliability issues after the race on Sunday

F1 | British GP | Ricciardo: Something "a bit off" with McLaren in agonising slump to P13, as Seidl says analysis will take place to understand it