It was another exciting and warm day in Florida for the FP3 session, with similar conditions to the first day of practice The temperature is  33.3 Celsius/91 Fahrenheit while the track remains on the high side at 51 Celcius/123 Fahrenheit.

The theme of the session was track evolution and as the session progressed there was a mix of drivers who normally were not at that level putting down solid fast times.

Some changes have been made to the track from the previous day. The pit entry has no curbs and the drivers must adjust the adjustment. The asphalt on Turn 17 has also been resurfaced.

After losing valuable time on track the day before in FP1 and FP2, Max Verstappen comes out first of all the drivers. The Dutch driver sets the pace at 1:34.037 on mediums.

Ferrari driver Charles Leclerc then sets down a faster lap 1:32.250 on softs. Forty-nine minutes into the session Mick Schmacher jumps into third.

Kevin Magnussen spins at Turn 17 and manages to escape without hitting the wall.

Esteban Ocon causes the first red flag of the session and hits the barrier at Turn 14 in the same area where Carlos Sainz had his incident in FP3.

Both Kevin Magnussen and Sainz have introduced some changes to their engine. Magnussen has a new power unit and a new control electronic system was put into Sainz’s car.

At the halfway mark of the session, Verstappen remains fastest 1:31:355 on medium tyres while Leclerc and Sainz trail behind on softs.

The session ended with Sergio Perez in P1 with a time of 1:30:304, followed by Charles Leclerc, and then Max Verstappen who were on all the soft tyres. The Mexican was just under 0.2s ahead of the World Championship leader.

Fernando Alonso was fourth fastest, and Sebastian Vettel was behind the Spaniard. Mick Schumacher was a very strong sixth fastest as both Haas cars finished inside the top 10, while Sainz was in eighth place. Just like in FP1, Alex Albon did a tremendous job and finished an excellent 9th in final practice.

After a promising FP3 session, Mercedes drivers George Russell and Lewis Hamilton faced a disappointing result. Russell was in 17th and Hamilton in 15th. 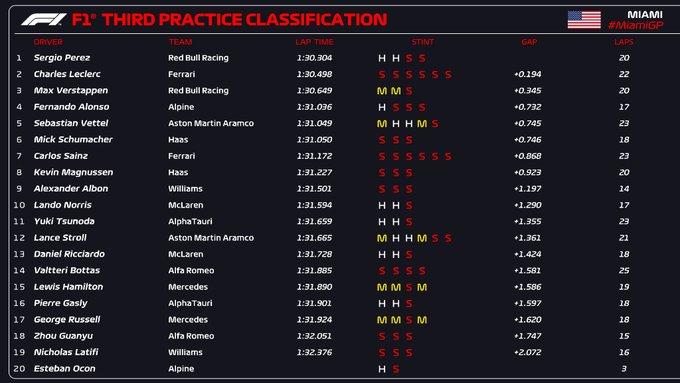 F1 | Hamilton on racist attacks he's suffered: "I don’t actually hold any grudge against those people, because they fueled me up"

F1 | Szafnauer: "Alonso signed with Aston Martin and I understand why he did it. But with Piastri, no"

F1 | Hamilton remembering Abu Dhabi: "It was one of the toughest moments, that I’ve had in a long, long time.”