The only driver using a 2021-spec car on the second test day at Yas Marina, Robert Shwartzman completed 130 laps, and ended the day comfortably fastest from McLaren’s Lando Norris. After a late, charging lap, the 2019 Formula 3 champion delivered a lap of 1:25.348, 40 minutes away from the session ending.

Ending the year in P1! 😄@ShwartzmanRob returns to the pits at the top of the timing sheets at the end of today’s #F1Testing

So impressive it was, Shwarztman’s lap ended up being faster than Nikita Mazepin’s qualifying lap for the Abu Dhabi GP, when Mazepin clocked a 1:25.685 to secure last place on the grid. He would later be ruled out of the race due to a positive Covid-19 test.

Behind him, Norris completed 103 laps for McLaren and finished the day P2, just under half-a-second behind the young Russian.

Aston Martin had problems the final day of testing, as a hydraulic issue momentarily curtailed their running with Sebastian Vettel, causing a red flag. The 4-time champion would later return to the track, and set a lap good enough for the third fastest time. Vettel also showed to be in good spirits, as he celebrated the approach of the festive season with his team:

#F1Testing complete with festive vibes in the garage. ✨#SV5 is putting in the laps around @ymcofficial on the new 18-inch @pirellisport tyres today. pic.twitter.com/lMTkRBJqQm

George Russell ended the day fourth fastest for Mercedes, completing just under 1.5 race distances. He ended up just 0.024s behind Vettel. The Briton had also driven in the first day of testing in the modified Mercedes W10. It was his second outing in a Mercedes F1 car after being announced as their 2022 race driver last September.

AlphaTauri’s Pierre Gasly completed the top 5, the Frenchman completing more than two race distances, with 149 laps. After finishing the season in style with a podium, Carlos Sainz took over the SF90 to end the day sixth fastest.

Very popular (and controversial) in post-season testing in 2020, Fernando Alonso was somewhat more anonymous this time, the two-time champion setting the 7th best time of the day, putting and end to a successful comeback season in F1.

Guanyu Zhou continued his preparation process as the new Alfa Romeo F1 driver for 2022, the Chinese drove on both days of testing, and set a respectable 8th fastest for the Swiss outfit, with an impressive number of 150 laps.

Sergio Perez and Pietro Fittipaldi completed the top 10 for Red Bull and Haas respectively, both completing over two race distances as well. The Williams team was absent from the final day of testing, as the Grove squad decided earlier in the year not to build a mule car just for this test.

This was the last day of F1 action in 2021, the series will return in February 2022, with pre-season testing for the all-new 2022 generation of cars in Barcelona. 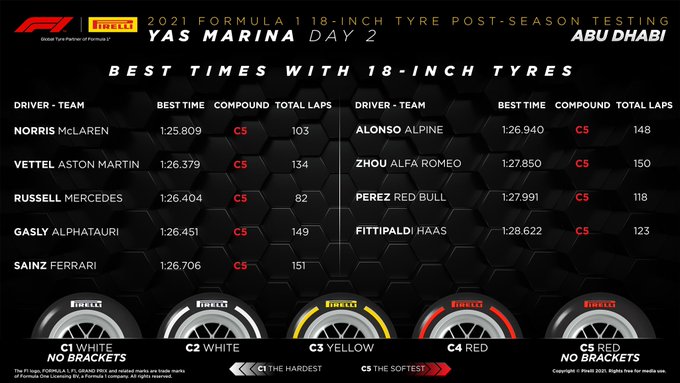 F1 | Singapore GP | Krack: "We don't think that we have done anything majorly wrong” after accusations of Aston Martin cost cap breach

F1 | Singapore GP | Ricciardo pleased with first top 5 result in the season, a “big one for the team” he says

F1 | Singapore GP | Gasly laments AlphaTauri's decision to go to dries too early: "There was no communication and no dialogue"