FP2 has wrapped in the lone star state for the United States Grand Prix and the temperature has heated up to 35 degrees Celsius/95 degrees Fahrenheit. The crucial issues the teams and drivers faced during the second session on the track were tyre management and navigating traffic while trying to put down the fastest laps. While it was a less dramatic session than FP1, there were still some exciting moments as drivers expressed frustration with the traffic issues track and Alonso cashing toward the end of the session with three minutes left on the clock.

Lando Norris immediately has an issue and soon as he hits the track and is not able to complete his first lap. The Brit complained that he was not able to turn properly and the McLaren team calls him in.

Max Verstappen and Lewis Hamilton try to start their lap at the same time and almost crash into each other as they battled for position into T1.

Sergio Perez tops the charts 20 minutes into the secession with Valtteri Bottas in second then Max Verstappen in third. Then the drivers make the switch to the soft tyres and Bottas puts down the fastest time at 1.35.360. His teammate Lewis Hamilton beats the Finn’s time but then has his time deleted because he exceeded track limits at turn 19.

Halfway through FP2 and Perez makes his way back on top at 1.34.946 . While Norris climbs to second only .257 behind the Mexican driver.

At twenty-six minutes into the session, Verstappen gets on the radio and expresses his frustrations to his team with being stuck in traffic, and decided to cut his run short.

Nikita Mazepin shares Verstappens’s sentiment about traffic and says it’s impossible to get a lap in.

The teams and drivers switch their focus on race runs with twenty minutes left in the practice session. The crucial matter now remains how hard can the divers push on their tyres in the high temperature on a long run?

With 10 minutes to go in FP2, the top three drivers are Perez, Norris, and Hamilton while Verstappen trails in eighth place.

With three minutes remaining Alonso losses, the rear of his car at Turn 19 and hits the wall. The FP2 session ends with Perez putting down the fastest lap at 1:34.946, with Norris in second and Hamilton in third.

During the practice session, Christian Horner revealed that Perez has found a good balance in the car and that his confidence is growing. After today’s practice session it’s obvious that Checo has unlocked the car’s potential that has given him an edge over the rest of the field. 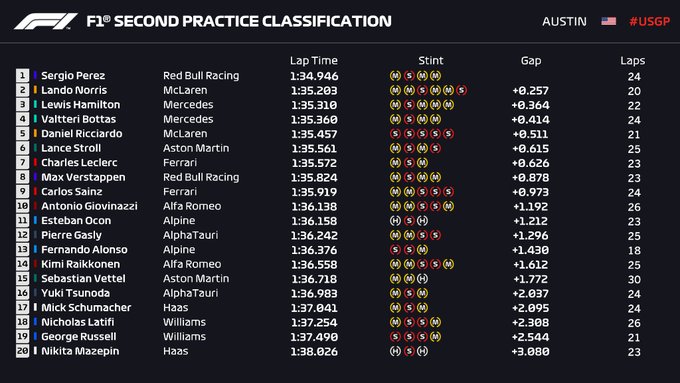 F1 | Seidl upbeat after Qatar showing: “Independent of the battle in the constructors’ championship, there are successes that can be achieved. So let’s be positive... we could actually show the pace”

F1 | Masi on stewards delays with decisions “You ...