The tension heading into qualifying was heightened as championship contender Lewis Hamilton visited the stewards over two separate incidents: allegedly ignoring double waved yellow flags and a dangerous moment with Nikita Mazepin as the Brit went slow on the racing line on the exit of a blind corner.

The yellow flag situation was caused by an accidental activation in the sector Hamilton was in and no further action needed to be taken.

The seven-time World Champion was reprimanded for the incident with Mazepin as Mercedes were fined 25,000 euros for it due to a lack of communication.

On the other side of the Mercedes garage, Valtteri Bottas’ car was fitted with a different power unit as a fuel leak was spotted on the one in his car at the end of FP3.

George Russell posted the first lap of qualifying with a 1:30.964, but that was instantly beaten by teammate Latifi by almost half a second.

On his first attempt, Hamilton went fastest, a couple of tenths ahead of Max Verstappen.

As the track evolved, Sainz popped into P1 ahead of Hamilton, Bottas, Leclerc, Norris, Ricciardo, Verstappen, Tsunoda, Gasly and Ocon.

Russell, Vettel, Stroll, Mazepin and Latifi was the bottom five with five minutes to go.

At the front, Perez clocked the fastest time from Valtteri Bottas. However, the Finn’s tough day looked set to continue as he reported misfiring towards the end of Q1 and had to be pushed back to his garage as he just made it to pit entry.

Verstappen looked set to go quickest but was badly blocked by multiple cars in the last corner as they were backing up for their final laps. Nonetheless, both title contenders made it through very comfortably in P6 and P9.

The Williams of George Russell produced a cracking lap to finish P14, ahead of Fernando Alonso in the Alpine. Aston Martin’s struggles from FP3 continued as Vettel and Stroll couldn’t progress from Q1.

Latifi, Vettel, Stroll, Schumacher and Mazepin got knocked out in Q1.

World Championship leader Max Verstappen logged the first big time of the session with a 1:27.953 on the medium tyres. Sergio Perez moved into P2 on his second lap on the same compound, 0.2s adrift. Bottas was P3, half a tenth away.

Carlos Sainz had a hairy moment as he spun in turn 10 and lightly touched the wall with his rear wing. No heavy damage was done and he could go again. However, he had a massive snap at the same part on his final run and couldn’t complete a lap.

Raikkonen and Bottas also had contact at the end of the session as the Mercedes looked to be dawdling on the racing line as Raikkonen tried to complete his final run.

Antonio Giovinazzi also hit the wall on his own at the end of Q2, but made it through in P10 on the medium compound.

Hamilton ended the session fastest, 0.2s clear of Perez and Verstappen. Bottas, Tsunoda, Gasly, Norris, Leclerc, Ocon and Giovinazzi also went through. Everyone went through on the mediums bar Norris.

Ricciardo, Raikkonen, Alonso, Russell and Sainz exited in the middle segment of qualifying.

Mercedes went out immediately but Hamilton had a snap in the first sector and had to abandon his lap. Bottas clocked a 1:28.143 to go fastest by three tenths from Tsunoda and Leclerc.

Hamilton initially beat it by a tenth, but Verstappen put in a storming 1:27.653 to go fastest by almost 0.4s.

Hamilton put in a great lap to beat Verstappen’s by just over a tenth, with Bottas going 2nd for Mercedes.

Verstappen looked set to take pole back as he was by almost two and a half tenths heading into the last sector but made a huge mistake in the last corner, locking up and then hitting the wall on the exit as he tried to get on the throttle. It meant he ended up in P3.

A dramatic ending to qualifying in Jeddah!

Max Verstappen hits the barriers on his final flying lap 💥 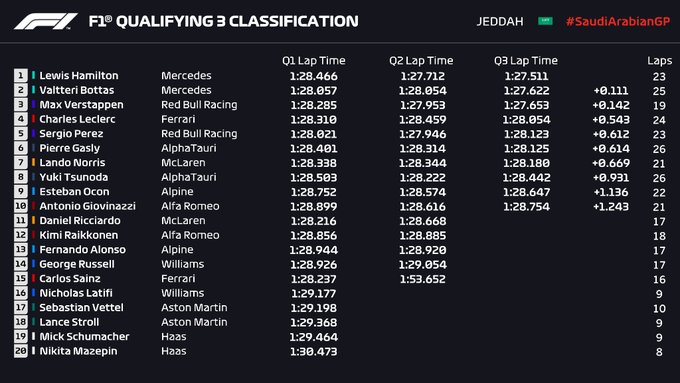